Painted up some New Vistula Legion recon troops with UAVs. Between this and playing Combat Mission Black Sea, definitely makes me want to try out some rules where stealth, spotting (differentiating between parts of the EM spectrum?) and electronic warfare play a big role. 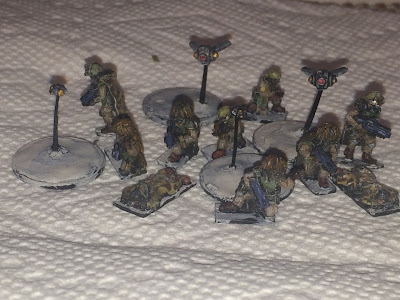 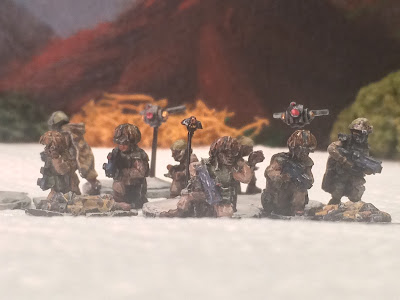 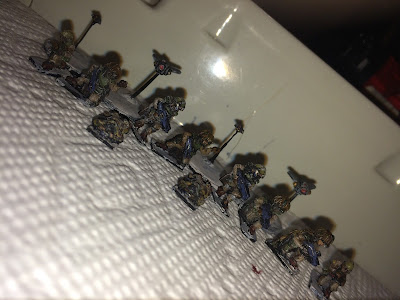 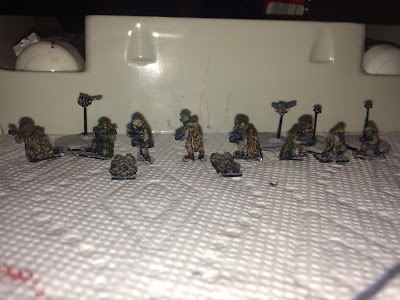 I know these are supposed to resemble near future Polish forces, but to me they seemed almost a spitting image to near future IDF, so I took a degree of inspiration from that for the color scheme.
Posted by mejobo at 11:41 PM No comments:

STOPWATCH FOR HUMANS OF THE PAST

Posted by mejobo at 8:42 PM No comments:

Warfare In The Age of Madness

Been playing a little Warfare in the Age of Madness. To teach a friend who is pretty green in wargaming I came up with two loosely "platoon-scale" (600 points, though these are each actually 680) forces that are designed to showcase different types of infantry and the mechanics of the game without involving many units to keep track of. To help make this work we played on a much smaller table than is normal for the game (roughly 6 bounds to a side) and with only three objective markers-- neither side uses a command post. Pictures will follow.

The forces:
Hell Divers ("Platoon" Level—8 models)
Inspired Motivation
Vast Network
Unified Teamwork
Heroic Moxie
Hawkeye Shooting
Elusive Evasion
Ninja Assault  [As you can see these are meant to be the best of the best-- and this helps keep the unit count very low!]
Assault Rifle Element with Grenade Launcher  and Hardened II  (meant to represent 3 combat-suited Hell Divers with something like Traveller's Advanced Combat Rifles-- with integral smart grenade launchers)
Rifle/MG Element with LAW-T2 and Hardened II (3 Hell Divers, one with a SAW, and two as a rifleman and a rifleman with LAW on his back)
Command Element  w/Medic Trait, Hardened II (the squad leader and a corpsman with assault rifles)
165+275+235= 680 its
[I will say preliminarily that using this force really felt like the original "Ghost Recon"]

Trojan Belt Pirates (Platoon Level—15 models)
Aggressive Motivation
Broad Network
Tight Teamwork
Brave Moxie
Average Shooting
Elusive Evasion
Ninja Assault [Also an elite force, but more 'focused.' They are good at close combat and not getting hit and have higher than average motivation, as they are meant to represent veteran space pirates who focus on swift strikes, stealth, and agility]
CQB Element w/Stun Grenades, Hardened II and Command (The Captain and his two best fighters, all in colorful combat armor and carrying heavy pistols and stun grenades)
Assault Rifle Element w/Recon, LAW-03 (Three pirates specialized in stealth and equipped with rifles and an RPG)
Rifle/MG element, LAW-03 (Three slightly less elite pirates, equipped as above but with an MG taking the place of one of the assault rifles)
Blade Element w/Molotov cocktails (2 pirates with blades and pistols, and one with a short range incendiary launcher)
CQB Element (3 pirates, 2 with shotguns and 1 with a carbine)
[This force may actually represent a few more men than the models suggest, as tends to be the implication in WitAoM, but ultimately this is an elite force and it 'feels right' that it should be about fifteen men at 'platoon' scale-- if there are more men I'd imagine they'd mostly be in the CQB and Rifle/MG element, as those are the less elite troops and their relative strength suggests more men to me. Playing with these guys and their sweeping assaults definitely calls to mind 'Sid Meier's Pirates' land battles]

Neither of these forces is particularly well designed, in my opinion, for a regular game of WitAoM. They might work as half of an allied force, but at the end of the day they seem weak against armor or masses of cheaper troops, and all of those advantages ultimately don't mean that much for their price. However it turns out they make a pretty excellent skirmish game against each other!
The pirates are raiding a small research station-- of particular value are several expensive robots. The Hell Divers made a quick drop in response to the distress call and are engaging on the ground in an attempt to prevent damage to stolen goods (as would be the case if they intervened in a risky orbital battle). As is normal in WitAoM, both sides also would like to confirm enemy casualties-- either for its own sake or for the salvageable goods or intel that this entails.

We ended up playing four rounds, switching sides each time. I also played against myself with these forces once to test them (and did multiple 'what if' assessments to see different results). These pictures are from that game:

I was actually a bit surprised how much fun this game was in a purely skirmish form-- the forces really felt like squad+ forces in a regular skirmish game. It is a bit swingy with such small forces but that tends to be true of skirmish games anyway (and this seems realistic). This game is quickly becoming my go-to for anything above RPG-ish level and below a battalion, especially for less scenario-focused gaming. It does need a bit more actual SF for my taste, however-- the rules basically represent modern forces but it seems possible to modify this (I've emailed to see if the publishers have any suggestions for fielding Mobile Infantry-like power armor, for instance).
Posted by mejobo at 3:22 AM 1 comment:

I'm a scale-hopper, what can I say?

I'm doing 15mm primarily, still, but some 28mm models are just too tempting. Perhaps I'll use 28mm for really small scale skirmishes more (15mm is a little fiddly on occasion).

And of course I  recently made a pretty sizable order of 6mm that I'll probably use with Warfare in the Age of Madness, Dirtside II, and/or Stryker (the cheapness of vehicles and the way ranges look make this scale preferable for anything bigger than a platoon, to me, no matter what the rules were written for).

Anyway, here's some models I've painted in the past few days:

Other news; 5150: Fringe Space is coming out very soon. I think I should note for readers of this blog that most of the mechanics and concepts previewed on this blog are not in the final product (though it is possible some elements will make it into free or cheap expansions in some form). The game is closer to Urban Renewal with a streamlined, narrative focus, and streamlined rules for space combat (that are similar to RSBS, focused on using limited bonus dice) and man to man fire fights (a la Chain Reaction 2015). The whole thing is built to be very modular-- it is extremely easy (and perhaps preferable, in some cases) to port in Urban Renewal or New Beginnings, Star Army, Fighter Command or Star Navy, or really any other THW game (as the combat mechanics are very streamlined I think I'll personally be doing this for more important encounters, and using the streamlined rules for quick random encounters where what matters more is resolution than exact tactical events). The whole goal of the game is to keep your character above water (or improving) month to month; there isn't an economic or financial component to this (that isn't abstracted), but instead the focus is on how these things affect Rep-- increasing or decreasing based on successes and failures. This makes characters fluctuate noticeably over the course of an adventure, which I think is very interesting.
Posted by mejobo at 4:15 AM No comments:

I'll do another play test soon with military forces-- the activation system makes military forces very different (and faster with greater numbers on the table). I'll also do a Pirate vs. Military scenario... I expect there to be a fair balance between the disorganized but fast and high-personal initiative pirates and the slow but steady, armored and organized soldiers. I hope also that this will bold well for even more varied forces (such as aliens).
For perspective, I see a baseline military squad as follows:
1 Sergeant (Has Command dice and Leader dice)
2x fire teams
-1xCpl (has leader die)
-3x Troopers
With all having less initiative (less personal activation dice) then the pirates but the leader and command dice meaning that they can put effort into coordinated actions while the pirates all act in essentially random order (though they are more likely to act individually in any one turn).
Of course a poorly trained force with low experience would have neither the pirate's personal initiative or the military's leadership and organization, while an elite force would have both to some degree (the 1-10 stat basis and having several stats play a function in activation and leadership allows a fair degree of granularity).
Hopefully even a platoon's worth of pirates will be playable, but we'll see-- regardless the system is really aimed at a handful of figures a side-- a la XCom. Admittedly this AAR is somewhat below the aims of the system in that it is two very simple AND small forces. Ideally if everyone has the same stats (excepting leader dice) and simple weapons and equipment (no SF weaponry or armor) then you'll be playing with more models on a bigger field, while a small game like this will be more interesting with more detail in each piece…

Anyway, onto the AAR: